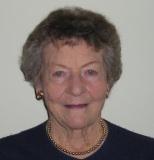 Like many members, Peg’s Club membership evolved through different phases of her personal life. When she first joined in 1980, she was attracted to the swimming pool. Then serving as Medical Director of the Golden Gate Regional Center, which provides services to Bay Area individuals with developmental disabilities, her office was close enough to allow her to swim during an occasional long lunch hour. Her father’s oldest sister had recently passed away and left her a small inheritance which she used for her club initiation fee. She already knew a lot of club members and was enthusiastically sponsored by Mary Anne Grady, Jo Wallace and Pat Hoffner. She served on the Club Board under President Ruth Klompus, participated on the Bridge Committee where she helped inaugurate Monday Drop-In games, and became a regular attendee of the Club’s Aqua Fit classes. For years until his death in 2012, Peg’s husband Bill went to the Olympic Club on Monday, Wednesday and Friday and she came to the Metropolitan Club on Monday and Wednesday, doing Tai Chi elsewhere on Fridays.

“I am so lucky to have this club as a place to entertain,” explains Peg. “I don’t have to look elsewhere. This is my entertainment home.” The Kaplans celebrated their 50th wedding anniversary at the Club; it was the venue for their son Paul’s wedding reception, and she recently hosted a baby shower for her first great grandchild (Will) at the Club.

Peg arrived in San Francisco from Colorado as a preschooler, age 4. Her father had been stationed on the Stanford University campus, “in a pup tent,” she recalls, and he always wanted to return to San Francisco. Her parents drove from Denver to San Francisco on the promise of a job with the Kress store on Market Street, but upon arrival found that there was no job. They moved into an apartment on Pine Street just a block south of Grace Cathedral, and not far from what was then the Woman’s Athletic Club on Sutter Street (renamed the Metropolitan Club.)

In one of the most small world stories ever, Peg’s mother and her future husband’s mother met at Huntington Park on Nob Hill where they took their respective 4 year olds, Peg and Bill, to play. The two children attended Kindergarten at the Peabody School on Bush Street. They would not meet again until adulthood. But their mothers had forged a friendship which they continued despite the move of Bill Kaplan’s family to Stockton, CA.

After Peabody, Peg attended Alamo Elementary, Presidio Middle School and George Washington High School where she was a member of its first graduating class. An excellent student, Peg attended UC Berkeley on a Cal Alumni Scholarship. In her second year, at the urging of her mother, Peg became a volunteer nurse’s aide to Dr. Larry Custer at St. Francis Hospital. “War broke out and everyone was expected to do their part.” Her war effort was to volunteer on Saturdays. One day, a woman in labor came in and Kaplan observed the birth. She was so impressed, and she considered the impact of the experience on her life as she walked from the St. Francis to Geary Street to take the street car to her parents’ home near Sea Cliff. The next morning at breakfast she told her parents that she would like to change her major and go to medical school. Despite the fact that this meant at least one extra year of undergraduate education to prepare, and then the extra years of medical school, her parents’ response was, “Whatever you want to do, we will try to support you.” 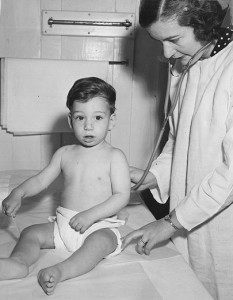 Peg finished high school in 1939 at the age of 17, UC Berkeley in 1943 at age 21 and the University of Nebraska Medical School in 1949 where she was one of 4 women out of a class of 80 students. During medical school, Peg and Bill were reacquainted through their parents and a long distance relationship ensued. “Bill was a writer; I was less so. Of course, we would never call each other because in those days the telephone was so expensive,” says Peg. They married in 1950, bought their house and had two children: a son born in 1954 and a daughter in 1956.

Peg’s professional life is extraordinary.  Working for the SF Department of Public Health, she became the city’s first district health officer. She describes her work in public health as “anticipatory guidance” which meant offering preventative services, such as the well-baby program, rather than specific treatment. Peg “pushed the button” to fluoridate the water in San Francisco for the first time. As a member of the San Francisco Medical Society she contacted the obstetrician group and proposed starting pre-natal classes. Eventually, through her work with the Golden Gate Regional Center, she became an expert on services to individuals with developmental disabilities. In her 70s, she was traveling around the state and the nation to testify as an expert witness. Explained Peg, “I was not testifying about who was right or wrong, but I had the knowledge to say what kinds of services individuals would require over a lifetime due to their disabilities.”

As the 21st century dawned, Peg began to shift her focus from children to seniors. In 2004, she was appointed by then Mayor Newsom to the Advisory Committee on Long-Term Care and Services for Seniors and Adults with Disabilities, a position she held until 2012. During that time she met Marie Jobling, Executive Director of Community Living Campaign. Peg served on that board until last October. Recently Peg has been involved through her church, the Community Living Campaign and SF Village, in an educational program called “Healthy Aging.” According to Peg, the most constant issue they hear from seniors has to do with transportation. She herself finds it increasingly difficult and expensive to come to the Metropolitan Club. Although Uber has expanded taxi-type services, “surge-pricing” makes these services extremely expensive for seniors. Peg’s group is sponsoring a fair on June 6 at the St. Francis Church which will focus on special transportation services. Says Peg of her current involvement, “I am still involved. But instead of dealing with children, I am now dealing with seniors.”

At age 93, Peg commented on what gives her joy. Music has always been at the center of her interests: Lamplighters, San Francisco Symphony, Pocket Opera, Chamber Music at the Legion of Honor. “Every year for the past five I have successfully bid on the Lamplighters’ string quartet donation. This past year I had eighteen people in my home, plus the quartet, for a wonderful evening.”

Even more recently, Peg recalls her Mother’s Day outing. Her son picked her up at noon and a family group including his wife, daughter, son-in-law, son-in-law’s mother, and Peg’s new great grandson traveled in one of two solar-powered boats on San Francisco Bay to McCovey Cove. They arrived about the 5th inning of the Giants’ final game in the series against the Miami Marlins. There were plates of bread, cheese, artichokes. The sun came out. They could follow the action by the sounds of the crowd floating out of the ballpark. The Giants won in the bottom of the 9th. As I spoke with Peg about the day we both agreed that life doesn’t get much better than that.