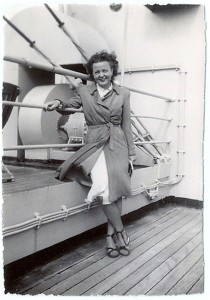 The Woman’s Athletic Club was only six months old, awaiting the completion of its clubhouse, when Mary Elizabeth (“M.E. or Emmy”) Phillips was born on April 2, 1916, in Shreveport, LA. Emmy’s family had roots in Alabama. Her grandfather was on his way to Texas when the train broke down in Louisiana and he decided to stay, opening up a country store in Lafayette.

Emmy attended LSU, hoping to enter the newspaper business, and met her first husband, an Annapolis graduate, while visiting her sister and brother-in-law in Houston.  A young bride, Emmy and her husband moved to San Francisco in 1937. “I almost start to cry when I think how wonderful San Francisco was at that time,” remembers Emmy. “We had a lot of wonderful restaurants. And we used to go over to Larkspur in our second-hand convertible where there was an open-air place to dance.”

The happiness of those years was interrupted by the 1941 attack on Pearl Harbor – Emmy’s husband was on the battleship USS Pennsylvania, and for seven days she did not know whether he had survived. Although unhurt in that event, he was killed in the South Pacific in 1944, and Emmy found herself a young widow working in San Francisco as an accountant and sharing an apartment with two other young women. The rent was $40 a month. Following the war, Emmy moved briefly to Hawaii but soon returned to her beloved San Francisco.

In 1947, Emmy joined the Woman’s Athletic Club. She recalls her primary interest was to swim. Work kept her from getting actively involved until the 1970s. She loved participating in the Aquacades. “I was not one of the top performers,” recalls Emmy with a smile. “But it was a lot of fun and there was great camaraderie.”

She remarried, becoming Emmy Long, and moved to Redwood City. Finding herself with little time to enjoy the Club, she resigned but reinstated in 1962. During her years away from the Club, she opened Elizabeth’s Antique Shop in San Mateo. The February 1952 issue of Antiques Dealer did a feature story on her that stated she wanted to ” put her prospective customers in a buying mood” so she opted for giving “the feeling of approaching an old southern home with high windows, gabled porches and ‘old south’ French windows.”

Moving into the field of interior design, Emmy was eventually hired by the sales department of Leisure World Walnut Creek, now known as Rossmoor. Emmy lost her second husband and moved back to San Francisco. While working for Rossmoor, she was invited to a dinner party given by past Club president Helen Lamont, and met her third husband, John Phillips. “All three of my marriages were happy,” says Emmy.

Emmy and John joined friends at the Club weekly to play bridge and have dinner.  Smiling, Emmy recalls how they made plans to ring in year 2000 at the Club, but were so sleepy after dinner that they were asleep as the new century dawned.

Emmy has fond memories of the Club’s Boutique which sold Club bathing suits, caps, robes and gifts, and was run by Club volunteers. “It was one of the saddest days for the Members when it closed.”

“There was a very close relationship between the Club employees and the Members,” explains Emmy. She remembers how happy she and her friends were for then very young employee Luz Reyes when she got married. Patrick, Pepe and a very handsome, Harvard educated bartender – a favorite of the young members – are other memories she has of Club employees.

“I have been privileged to live an interesting life,” reflects Emmy on her 97 years. “The Metropolitan Club has been very important in my life and I have met some of my dearest friends there – very interesting, stimulating ladies. I am an optimist, although like everybody I have had my down periods. Now, when I am alone, I live in the past too. I look at pictures and they remind me of the good times.”

Should you be fortunate to sit with Emmy over a cup of tea, you will find she is still creating good times as she shares her grace, humor and life stories with any privileged to be within earshot.