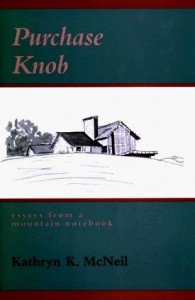 San Francisco writer Kathryn McNeil first became a member of the Metropolitan Club in the 1920s at the age of six.  It was here that she learned to swim, and where she is a member today. Kathryn’s written work, however, including Purchase Knob, published in 1999 and available in the Club’s library, speaks primarily of her 30 nearly idyllic years spent in the Great Smoky Mountains of southern Appalachia.

Purchase Knob: essays from a mountain notebook, is a lyrical and enchanting memoir of Kathryn’s time in North Carolina, where she raised five children, three girls and two boys.  She speaks of her love of her mountain home in the book’s opening passage: “There’s a summer place, a farm, forever imprinted on my memory, spacious in its views, lovely in its close-ups, on the gentle slopes of Purchase Mountain in the southern Appalachians. These are ancient mountains, some of the oldest on earth. Worn down by the ages from water, frost and the work of the wind, they are gentle, livable mountains. Having a home on the top of one is as close to heaven as you can get.”

World War II was partially responsible for Kathryn’s love of the Appalachians. She met and married Voit Gilmore, a Naval Officer, in 1945, while he was stationed in San Francisco. In 1946, shortly after the war ended, they relocated to North Carolina, where Gilmore became involved in his family’s lumber business. They built two homes, one in the mountains and one in Southern Pines. Although the marriage did not last, her lifelong passion for the flora and fauna of the mountains and the beauty and serenity of her remote country home shines through on every page.

Kathryn’s mother, Mrs. Charles Kendrick, was Kathryn’s initial sponsor for the Metropolitan Club. Mrs. Kendrick, an early Club member, was one of a handful of members who purchased bonds to help finance the expansion of the Clubhouse (completed 1923) and then forgave them. Members today continue to be the beneficiaries of the extraordinary generosity of these early members. These early donors and philanthropists are acknowledged in a framed calligraphy list on the second floor, across from the large calligraphy panels acknowledging donors to the Stewardship Campaign.

Mrs. Kendrick was an inspiration to Kathryn. While active at the Women’s Athletic Club (now, the Metropolitan Club), she also served as President of the Francisca Club and President of the Western Hemisphere division of the Girl Scouts.

Kathryn returned to San Francisco in 1974, still retaining her Purchase Mountain property.  Here she married Don McNeil, the widower of a longtime friend. They blended their families to become a new family with ten children. She rejoined the Metropolitan Club in the early 1980s, where she served on the Library and House Committees.

Kathryn honed her writing skills through a writing group of 14 notable San Francisco women, under the tutelage of the late Mary Jane Moffat, formerly a creative writing instructor at Stanford University under Wallace Stegner. Two additional books published by the writing collective, The Subject of Our Lives (1999) and Proust, Pickles, and Paychecks (2003) include additional stories by Kathryn McNeil about her years in the Great Smokies.

Today, at the age of 92, Kathryn enjoys the Metropolitan Club dining room, the library and hopes to return to swimming. Her San Francisco home has a grand view of the Bay, affording her a bird’s eye view of the recent America’s Cup races. She and her former husband donated Purchase Mountain and its 600 acres to the Great Smoky Mountains National Park, where it is now used as an education and science center, hosting groups of school children. She enjoys her large family, including eight great grandchildren.