In early November, Metropolitan Club member Sue Paul began her 96th birthday the same way she has begun each day since joining the Club in 1976. She walked the 5 blocks from her Nob Hill home at 9:00 AM for her daily swim. This particular day, however, she was surprised by a group of fellow members who gathered around the pool and sang Happy Birthday to her. Returning home, the rest of the day was filled with phone calls and cards from others wishing her a happy day. 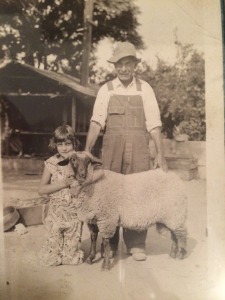 For years now, Sue has been an inspiration to many who look forward to seeing her on her daily trip. The doormen at the Masonic Auditorium open the door for her so that she can avoid the Taylor Street hill by taking the building’s elevator from California to Pine Street. “They would wonder where I was if I didn’t show up,” she notes.

Sue was the seventh of ten children, born at home in Fresno on November 6, 1919. Her parents were of Armenian heritage and the family lived on a farm where they grew figs and grapes that were dried to raisins and sold to packing places. She remembers a happy childhood with family dinners around a large table, working hard, attending the local grammar school and swimming in the large irrigation ditch that ran along the property. Sue recalls her mother and father as a very nice, handsome couple. Her mother was strong and strict. “She had a sharp eye. She didn’t have to say much; she just had to give you a look,” recalls Sue. Hanging on the wall of Sue’s apartment is a poem that she wrote and illustrated for her mother. It says, in part:
Reaping a great harvest and being able to share it
With others is one of her greatest joys … Next to …
Raising 10 Children
Gardening is her Pleasure.
Two of Sue’s siblings are still living, one older and one younger, including a brother who saw action in World War II, when he was shot in the shoulder but survived.

Sue joined the Club with the encouragement of her husband who was a member of the Olympic Club. He swam there every day, walking from the medical building at 450 Sutter where he had his general practice. “You need to join and start swimming,” he told Sue whose sister-in-law Lillian was already a member. Sue loved the Club right away. Although her first love was swimming, she soon found a way to contribute in a special way by establishing and operating the successful and well-loved boutique on the Club’s first floor. There, members could buy everything from bathing caps to hostess gifts. When she approached then president Ollie Dollar, she recalls Ollie saying, “Sue, you can do anything you want.” Sue remembers fondly working with member and co-chair Ingrid Gillette and many member volunteers who staffed the boutique which closed in the 1990s due to a decreasing availability of daytime volunteers and tax-related concerns relating to distinctly private clubs. “It’s really sad that it’s gone,” muses Sue. “It was a good thing and I wish we could have it back. But time goes on.” 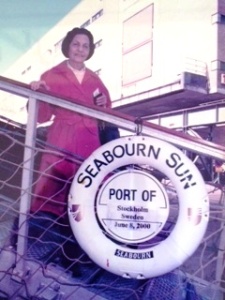 Sue and her husband traveled during the month he took off from his practice every year, including trips to Greece and Italy. They had a wonderful life, she recalls. “He was such a nice man. I miss him greatly.” Sue loves her home on top of Nob Hill where she enjoys a panoramic view of the Golden Gate, Twin Peaks and downtown. “It’s so beautiful, and so convenient – walking distance to the Club and everywhere.”

Sue has said that swimming makes her feel young again. “It’s a wonderful feeling. That’s the whole thing. Someplace to go and to get some physical activity. You can pick up a book and read and then what have you done? I’ve got to keep going.”