Life in the Path of History
By Marcia Schneider

Olga Andreyev Carlisle, painter, author, editor and translator, is a longtime resident of San Francisco. She moved here in 1975 with her late husband, author and former Knopf editor Henry Carlisle, but in many ways, her heart is still divided between San Francisco, Paris, France, where she was born and raised, and Russia, the land of her cultural heritage. She has lived a life few can imagine, directly in the path of history making individuals and events.

Olga studied art as a young adult in New York with Robert Motherwell and other influential painters of the time, but was strongly influenced and enchanted by the classic and Impressionist paintings from the Louvre and other museums of Paris that she haunted in her youth. Unwilling to compromise her artistic integrity for the modern trends of the early 50s, she stuck with her principles. Her colorful paintings have withstood the test of time and are still sought after today. 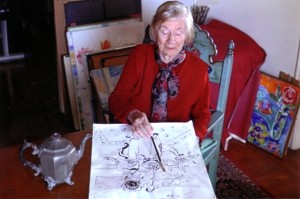 It was in Paris, while studying painting and living with French friends, that she met and fell in love with Henry Carlisle, an American with roots in Nantucket and San Francisco. They married, and their son, raised in France and New York, followed in their rich literary heritage, and today practices his craft as a literary agent in New York.

In addition to writing six books and innumerable magazine articles, Olga collaborated with Henry on the translation of Dostoyevsky’s The Idiot, as well as co-writing a novel with him. Together they taught at the Squaw Valley Community of Writers.

Olga, Henry and her father and brother helped bring the works of Alexandr Solzhenitsyn to the western world. His first novel, captured on film, was smuggled out of Russia in camera equipment. Olga and Henry also played a large part in bringing part one of The Gulag Archipelago out of Russia and making his works available to the rest of the world.

Olga’s family was forced to leave Russia following the Bolshevik revolution of 1917. Mrs. Carlisle’s mother also was a writer and painter, her father an activist poet, and her grandfather a famous Russian playwright. The family was again displaced from their home in Paris during World War II, exiled to the island of Oléron, near Bordeaux, France, from 1939–1945. Mrs. Carlisle’s 1982 memoir, An Island in Time, recounts the hardships, hopes and risks of the time, when she, but a teenager, delivered messages by bicycle to the French Resistance. 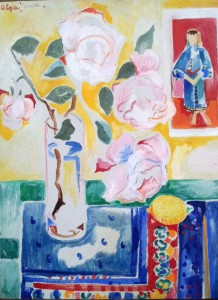 Much of Olga Carlisle’s writing was done at the Metropolitan Club, which she credits for “the opportunity to write in perfect tranquility and comfort, among good friends.” Two of her books, Far From Russia (St. Martins Press, 2000) and An Island in Time (Henry Holt & Co., 1980) can be found in the Club library, as well as her mother, Olga Andreyev’s, memoir, Cold Spring in Paris (1972). 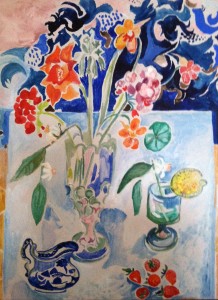 Fleurissant, a show of Olga Carlisle’s paintings, was on display in April at the Piccolo Press, 703 Columbus Avenue.